The Aqua Mission Team received the Pecora 2022 Group Award. Click to view a video of the award ceremony.

Aqua, Latin for water, is a NASA Earth Science satellite mission named for the large amount of information that the mission is collecting about the Earth's water cycle, including evaporation from the oceans, water vapor in the atmosphere, clouds, precipitation, soil moisture, sea ice, land ice, and snow cover on the land and ice. Additional variables also being measured by Aqua include radiative energy fluxes, aerosols, vegetation cover on the land, phytoplankton and dissolved organic matter in the oceans, and air, land, and water temperatures.

The Aqua mission is a part of the NASA-centered international Earth Observing System (EOS). Aqua was formerly named EOS PM, signifying its afternoon equatorial crossing time. A timeline of Aqua on-orbit progress through the initial 120 day check-out period can be found here.

Aqua was launched on May 4, 2002, and has six Earth-observing instruments on board, collecting a variety of global data sets. Aqua was originally developed for a six-year design life but has now far exceeded that original goal. It continues transmitting high-quality data from four of its six instruments, Atmospheric Infrared Sounder (AIRS), Advanced Microwave Sounding Unit (AMSU), Clouds and the Earth’s Radiant Energy System (CERES), and Moderate Resolution Imaging Spectroradiometer (MODIS). A fifth instrument, Advanced Microwave Scanning Radiometer for EOS (AMSR-E), suffered a major anomaly in October 2011 and ceased its high-quality data transmission at that time. Later the instrument was turned back on, and it transmitted reduced quality data important for intercalibration purposes before being powered off in March 2016. The sixth Aqua instrument, Humidity Sounder for Brazil (HSB), collected approximately nine months of high quality data but failed in February 2003.

Aqua was the first member launched of a group of satellites termed the Afternoon Constellation, or sometimes the A-Train. The second member to be launched was Aura, in July 2004, the third member was PARASOL, in December 2004, and the fourth and fifth members are CloudSat and CALIPSO, in May 2006, and the sixth member was GCOM-W1 in May 2012. In December 2013, PARASOL completed its mission and exited the A-Train. The latest addition to the A-Train was OCO-2, launched in July 2014. At that point, the A-Train was led by OCO-2, followed by GCOM-W1, Aqua, CALIPSO, CloudSat, and Aura. By early 2022, CloudSat, CALIPSO, and Aqua had all exited the A-Train. Due to fuel limitations, Aqua completed the last of its drag makeup maneuvers in December 2021 and is now in a free-drift mode, slowly descending below the A-Train and drifting to later equatorial crossing times. Its AIRS, AMSU, CERES, and MODIS instruments all continue to collect and transmit science-quality data. 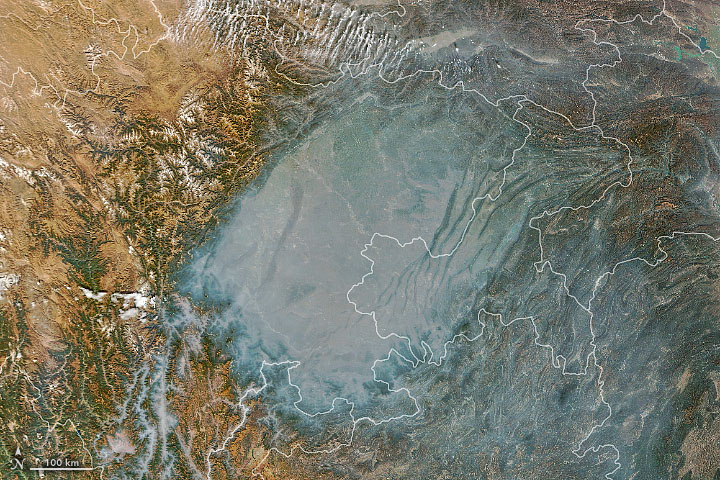 A series of five video podcasts (i.e., vodcasts) have been produced by NASA Goddard TV in conjunction with Aqua mission personnel.