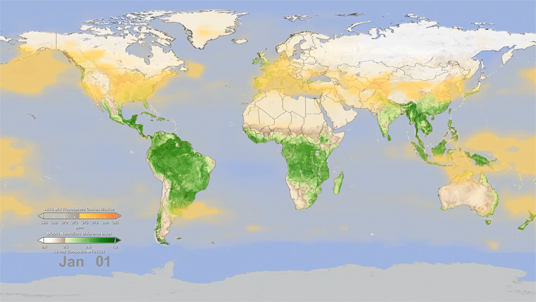 This image is the first frame of an animation that shows the seasonal cycle of vegetation as measured by the Moderate Resolution Imaging Spectroradiometer (MODIS) and the concentration of carbon dioxide in the atmosphere as measured by the Atmospheric Infrared Sounder (AIRS). The animation begins on January 1, when the northern hemisphere is in winter and the southern hemisphere is in summer. At this time of year, the bulk of living vegetation, shown in green, hovers around the equator and below it, in the southern hemisphere. The full animation, plus additional information, can be found on the NASA Scientific Visualization Studio website.