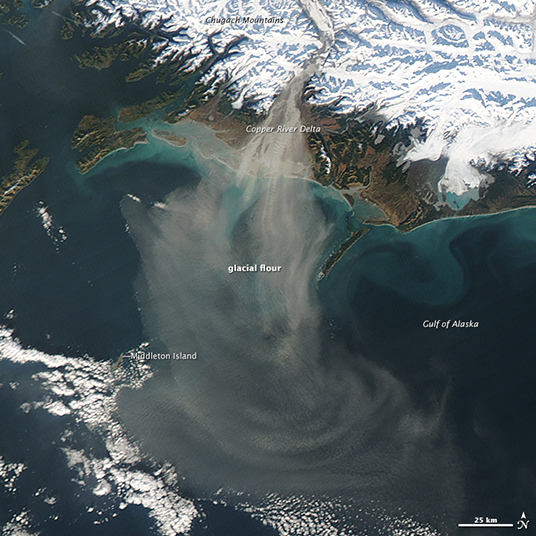 When glaciers grind against underlying bedrock, they produce a silty powder with grains finer than sand. Geologists call it “glacial flour” or “rock flour.” This iron- and feldspar-rich substance often finds its way into rivers and lakes, coloring the water brown, grey, or aqua. When water levels are low, the flour can dry out on riverbanks and deltas and become dust for winds to lift into the air.

That’s what was happening on October 28, 2014, when the Moderate Resolution Imaging Spectroradiometer (MODIS) on NASA’s Aqua satellite captured this image of northerly winds blowing dust from the Copper River Delta over the Gulf of Alaska. Dust events are most common in this area in the fall, when river and lake levels in south central Alaska are at their lowest. Another period of high dust activity occurs in late winter and early spring.

This was the first dust event in the Copper River Valley to be detected by MODIS sensors in 2014. So far this year, south central Alaska has seen comparatively few events because it has been wetter than usual and river and lake levels have been high, explained Goddard Space Flight Center atmospheric scientist Santiago Gassó. “But despite the conditions, a high-pressure system over central Alaska generated katabatic winds strong enough to dry out the riverbanks and lift an impressive amount of dust.” The storm picked up so much material that when the plume reached Middleton Island, surface visibility dropped as low as 8 kilometers (5 miles), according to the University of Wisconsin’s CIMSS satellite blog.

Though the extent of the plume was notable when MODIS passed over, the event was relatively short-lived in comparison to others that have occurred in this area in recent years. A two-week dust event in 2006, for instance, produced dense plumes that deposited between 60 and 160 kilotons of dust into the Gulf of Alaska—about the same amount transported by eddies in surface waters. (The event was described in detail in a research paper in Geophysical Research Letters.)

“One of the reasons dust events are particularly interesting in this part of the world is that they may be activating dormant phytoplankton in the Gulf of Alaska in ways that are having significant effects on marine ecosystems,” explained Gassó. “But we really need more observations with satellites—and especially by people on the ground and at sea—to determine if there is a relationship.”

Since 2011, a small team of NASA-funded scientists have been monitoring filtered air samples from a site on Middleton Island. They hope to develop a better record of major dust events in the region, to validate satellite observations, and to achieve a better understanding of the relationship between dust storms and the marine ecosystem.