Carbon Monoxide in the Mid-Troposphere over Indonesia Fires, October 26-28, 2015 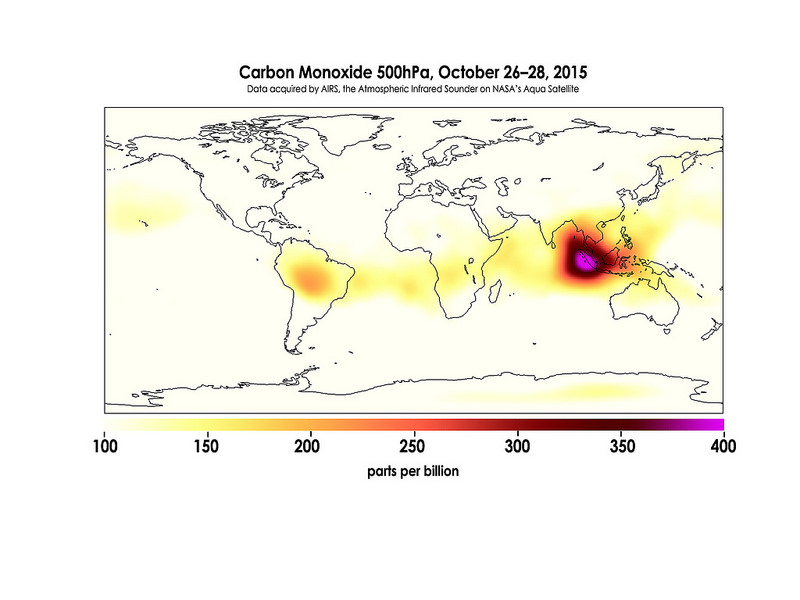 In 2015, widespread forest fires across Indonesia burned tens of thousands of acres over three months, causing high levels of pollution, loss of life, and billions of dollars to the Indonesian government. Most of the fires are believed to have been set to clear farmland during the dry season, but a long term drought enhanced by strong El Niño conditions contributed to the fires remaining unchecked due to lack of rain.

This image, made with data acquired by AIRS, the Atmospheric Infrared Sounder on NASA's Aqua Satellite, shows the global concentration of carbon monoxide at the 500hPa pressure level, or approximately 18,000 feet (5,500 meters) altitude. The data are an average of measurements taken over three days, from October 26 through 28, and the high concentration and large extent of the fires over Indonesia are quite apparent. While the scale for this image extends to 400 parts per billion, local values of carbon monoxide can be significantly higher.

Original image and caption can be found at http://airs.jpl.nasa.gov/resources/images/159