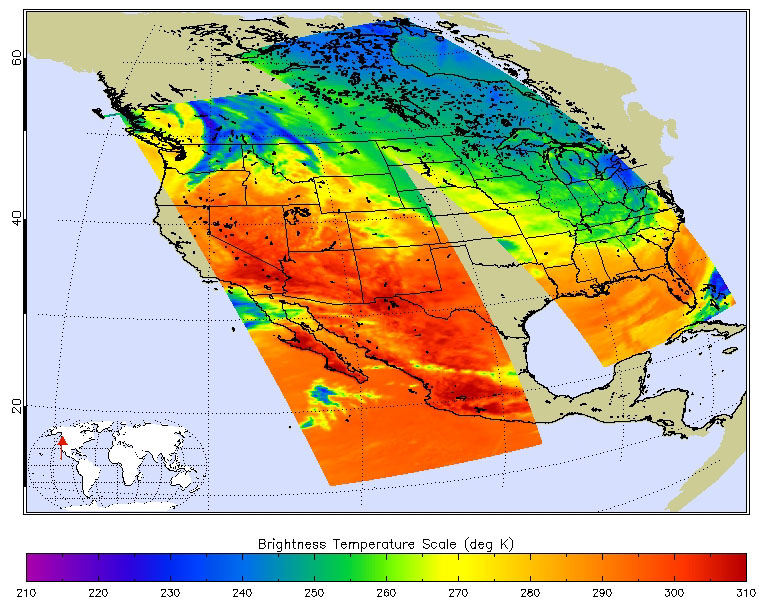 While people in the eastern two-thirds of the U.S have been dealing with Arctic Air, the bulge in the jet stream over the eastern Pacific Ocean has been keeping the western third of the U.S. in warmer than normal temperatures over the last two months. Infrared data from NASA provided a look at those surface temperature extremes from west to east.

Californians have been flaunting their flip-flops and tee shirt weather at friends and relatives on the frigid East Coast. The contrast is extreme, Californians are experiencing their warmest winter since modern record keeping began and Bostonians are staggering through 8 foot and higher snowdrifts. Why?

“It’s the weather-controlling polar jet stream – a fast river of wind in the upper atmosphere – that has been locked in an extreme pattern for the past few years," explained Climatologist Bill Patzert of NASA's Jet Propulsion Laboratory (JPL) in Pasadena, California. "Rather than circling in a relatively straight path, the jet stream has meandered in great north-south waves. In the west, it’s been bulging northward, arguably for the past two winters – a pattern meteorologists have nick named the 'Ridiculously Resilient Ridge.' Over frigid northern Canada, the jet takes a hard right turn and plunges into the upper Midwest and East Coast, plummeting temperatures and creating punishing ice and snow storms.”

Those temperatures are apparent on infrared data taken on February 18 at 18:53 UTC (1:53 p.m. EST) from the Atmospheric Infrared Sounder or AIRS instrument that flies aboard NASA's Aqua satellite. AIRS data are processed and made into false-colored imagery at NASA's JPL. In the image surface temperatures from Washington State, south to California, Nevada, Arizona, New Mexico and western Texas appeared quite warm. Surface temperatures ranged from 290K/62.3F/16.8C to 300K/80.3F/26.8 C.

On February 18, when the AIRS data was taken, the high temperature in Los Angeles, California reached 75F. That was one of 10 days out of the first 20 days of February, where temperatures reached or passed that mark in the city.