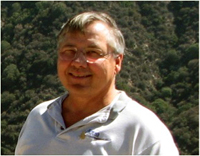 After growing up in Prince Georges County, graduating from DuVal Senior High School in 1964, and earning an AA degree in Computer Technology from Montgomery Jr. College, Bill Guit began his career at NASA Goddard Space Flight Center in 1967.  The following year he was called to active duty with the DC Air National Guard and eventually spent nearly a year in Viet Nam.  Bill returned to Goddard in 1969 and began attending the University of Maryland in 1970.  He earned his BS degree in Aerospace Engineering in 1973 and spent two years in the Graduate Astronomy Program pursuing an advanced degree in Solar Physics. Bill returned to Goddard full-time in 1975.  While working at Goddard for the Smithsonian Astrophysical Observatory, Bill earned a Masters in Space Technology from Johns Hopkins University in 1980.

Having spent his entire career at Goddard, Bill has been involved in Mission Operations for a dozen-and-a-half different space science and Earth science satellites at GSFC. He has also  been heavily involved in the increasingly important field of debris-avoidance for satellites in debris-affected orbits. Bill has been Mission Director of the Earth Observing System (EOS) Aqua satellite ever since its launch in 2002 and is also Mission Director for the Aura satellite.

In 1977 Bill moved to Calvert County, Maryland, where he and his wife Anita are raising their two children Billy (born in 1996) and Hailey (born in 1998). Besides spending time with his family, Bill still enjoys playing softball, which he has done at Goddard for over 35 years.  Bill is the past President of the Goddard Slow Pitch Softball Association, a position he held for 12 seasons.  Bill is looking forward to retiring and spending more time with his children before they advance into adulthood.