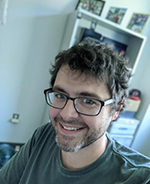 Will McCarty became Aqua Program Scientist in 2021, after the tragic death of his predecessor Gail Skofronick Jackson. Will moved to NASA Headquarters to serve as a Program Manager in the Weather and Atmospheric Dynamics Focus Area and as the Program Scientist for several key missions. Prior to Headquarters, he was a research meteorologist at NASA Goddard Space Flight Center. While at NASA Goddard, he was in the Global Modeling and Assimilation Office (GMAO), where he focused on satellite data assimilation and led the Atmospheric Observations group, working towards the additional and improved use of satellite observations within the GMAO system. He also served as the Project Scientist for the Commercial Smallsat Data Acquisition (CSDA) program. His research has spanned a broad range of remotely sensed and conventional observations.

Will received his bachelor’s degree in Meteorology from Valparaiso University in 2003 and his master’s and PhD degrees in Atmospheric Science from the University of Alabama in Huntsville, in 2005 and 2008, respectively. His links to NASA began in graduate school, and his PhD dissertation focused on the assimilation of radiances from Aqua’s Atmospheric Infrared Sounder (AIRS) with the aim of improving short-term numerical weather forecasts.