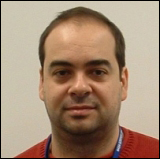 Dr. Lazaros Oreopoulos (a.k.a Lazaros Oraiopoulos) is the Chief of the Climate and Radiation Lab. He has been at GSFC since 1997, initially with JCET/UMBC (1997-2008) and then as a civil servant (2008-present). He conducts research on the modeling and remote sensing of clouds, cloud-aerosol interactions, and many aspects of atmospheric radiative transfer for climatic applications. He is the Deputy Project Scientist for the Aqua satellite mission, and a member of the CloudSat Science Team, the GEWEX GASS Science Steering Committee, and the International Radiation Commission. He has also served as a member of the Landsat Science Team, the AMS Atmospheric Radiation Committee, and the GEWEX Radiation Panel. Dr. Oreopoulos holds a B. Sc. in Physics from Aristotle's University of Thessaloniki, Greece, and M. Sc. and Ph. D. degrees in Atmospheric Sciences from McGill University, Montreal.